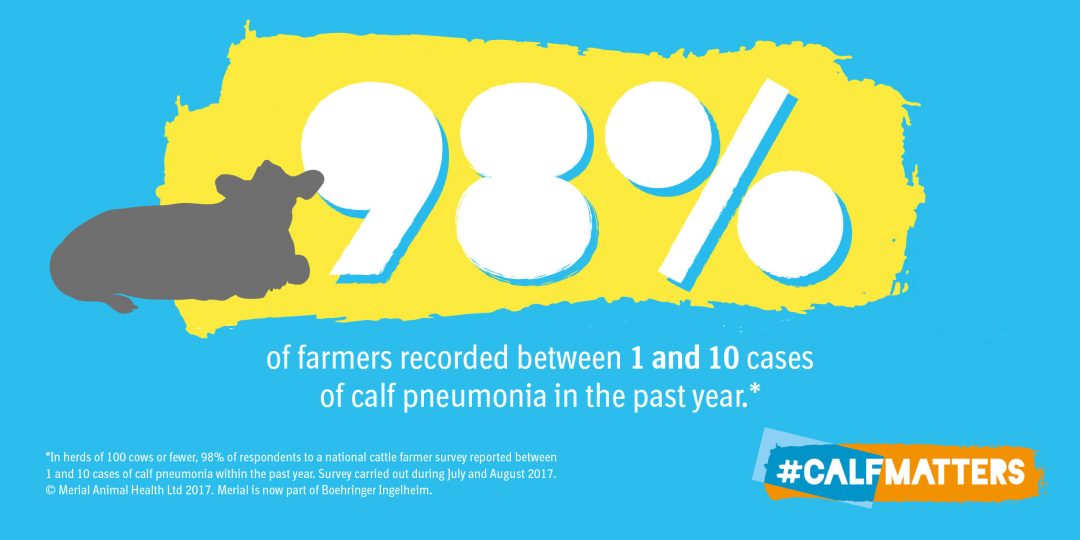 Boehringer Ingelheim has launched a national vaccination awareness campaign at UK Dairy Day 2017 to encourage farmers to consider vaccinating calves against calf pneumonia. The campaign follows the results of a national cattle survey. The results show that calf pneumonia remains prevalent on farm, and less than 25% of farmers are using calf vaccination as a preventative measure.

Calf pneumonia is a cause of major economic loss for the cattle industry, affecting an estimated 1.9 million animals1 and costs the UK cattle industry around £60 million2. At farm level the losses are also significant, with costs in the region of £43 per dairy calf and £82 per suckler calf3.

A UK-wide cattle survey carried out in July and August 2017 investigated calf pneumonia control practices on UK beef and dairy farms. It found that 98% of cattle farms surveyed had at least one case of calf pneumonia in the past year.

“While 38% of farmers surveyed said cases of calf pneumonia had decreased over the past three years, 41% said the number had stayed the same and 21% said they had seen an increase in cases. This suggests that farmers need to re-evaluate the steps they are taking to combat the disease.”

While the cost of calf pneumonia is well documented, the survey responses also highlighted its non-financial impact, particularly on staff time and stress. The top six biggest impacts reported by farmers through the survey were: increased costs from vet treatment and medicines (66%), loss of income through less productive calves (63%), loss of income from dead/culled calves (49%), increased time to finishing/bulling (29%), staff stress (35%), and increased staff time and costs (32%).

Calf husbandry plays an important role in preventing calf pneumonia and farmers indicated they implement a range of measures on farm. The survey found that 87% give colostrum within four hours of birth, 85% house calves in similar age groups, 69% have focussed on optimising housing conditions and ventilation, and 47% use calf jackets during cold weather. However, less than a quarter of respondents (24%) use calf vaccination and only 8% use dam vaccination as a method to prevent disease. See our checklist for preventing calf pneumonia here.

Where farmers are vaccinating calves against calf pneumonia, they report improved health, reduced medicine and vet costs and improved growth in some cases. Responding to a question about observed differences in calves vaccinated against calf pneumonia compared to unvaccinated animals, 67% of farmers reported reduced incidences of disease, 55% found calves had improved health and wellbeing, 53% had observed a reduction in the use of antibiotics and 31% required fewer visits from their vet. Over a quarter of respondents to this question (26%) observed higher or faster weight gain in calves to one year old.

When asked why farmers were choosing not to vaccinate against calf pneumonia, 31% of farmers said they weren’t sure of the benefits while 25% felt the upfront cost of vaccination is too expensive.

The low numbers of farmers taking up calf vaccination concerns Ms Timothy. She says: “As an industry we must take steps to reduce antibiotic use. Calf pneumonia is a multi-factorial disease, caused by a complex interaction between viruses and bacteria, management practices and the environment. Good control strategies should address the wide range of risk factors that contribute to disease, and implementing an appropriate vaccination programme as part of this will further enhance the resilience of calves to infection.”

National Cattle Survey run in conjunction with British Dairying and sponsored by Boehringer Ingelheim, NFU, Mole Valley Farmers and Ulster Farmers Union. A total of 444 farmers responded to the survey, of which 12% have suckler units, 80% dairy farms, 5% calf rearing units and 4% growing/finishing units. Some respondents had more than one type of enterprise.

Watch Steve Glanvill Practice Partner at Hook Norton Vets talk through why a vaccination protocol is a good management practice to help avoid calf pneumonia on farms, by reducing the use of antibiotics and the mortality on farms. The vaccination protocol gives very good results and feedback from farmers is positive.

References
Back to Main Blog Page