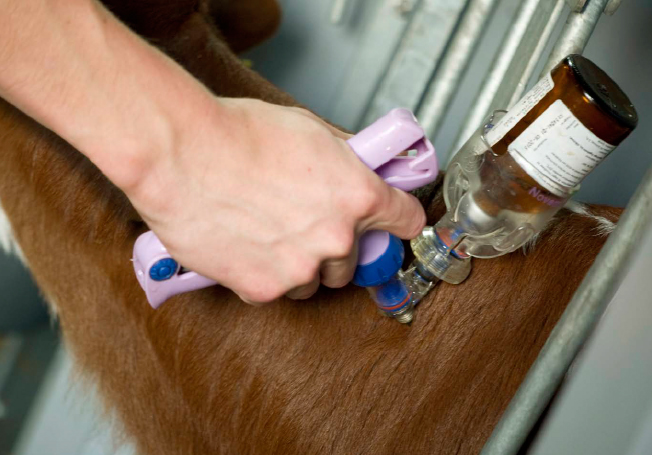 Vaccinating against bovine respiratory disease should be, for many producers, the next step in a robust calf disease prevention plan – not to mention insurance against veterinary, medicine and labour costs, as well as lost heifer performance. It will also help to reduce antibiotic use on many dairy units.

Calf health is a ‘hot spot’ for disease in dairy herds and an obvious target for changing practices and protocols to prevent illness and reduce antibiotic use. RUMA has certainly identified it as such and wants to see an increase in the use of vaccination to help prevent pneumonia – bovine respiratory disease (BRD) – in calves. The latest #Calfmatters survey, carried out by Boehringer Ingelheim and involving 400 respondents, shows that producers are aware of the importance of colostrum feeding and the need to do it correctly – checking quality, measuring volumes and feeding enough to meet the recommended guide line (between 10% and 15% of the calf’s birth weight) within six hours of birth.

“We asked a specific question in the survey, aimed at finding out to what extent colostrum quality is being measured,” says Boehringer Ingelheim Animal Health’s vet Ailsa Milnes.

She explains that there are several ways to measure immunoglobulin levels in colostrum, with a Brix refractometer or a colostrometer most frequently used. “Colostrum can vary significantly in terms of quality, so many vets now recommend it is regularly checked.”

Dr Milnes adds that while more than 75% of respondents said that they ensure that they feed adequate colostrum, just 30% measured colostrum quality. “And this is something that we will hopefully see improve year-on-year, as the testing becomes more widely used.”

Despite increased awareness, many producers have yet to put robust protocols in place to ensure that new-born calves are fed enough good quality colostrum in the first six hours of life. If protocols are in place, then producers should also check that their colostrum feeding protocols are working. “And that can mean blood testing either individual calves or batches at between two and seven days old,” says Dr Milnes.

“There are simple tests available to check the protein levels in the blood, which tells us if sufficient good quality colostrum has been fed in those first vital hours. Testing provides assurance that the colostrum feeding regime is up to scratch and actually doing what it sets out to do. It is worth having a chat with your vet.”

“And, if it’s not, producers can act quickly to identify any ‘pinch points’ in the system and get colostrum feeding management back on track.”

With the importance of ensuring that the calf has a good start and good immunity to help fight off disease, Dr Milnes also encourages producers to check hygiene protocols. “These are other typical pinch points, but good hygiene is essential, as well as providing calves with clean and dry bedding and well-ventilated housing – with no drafts,” she says. “Nutritional management is also vital, to avoid putting the calf under nutritional stress, which will render her more susceptible to disease.”

Even when all aspects of calf rearing management are in place and running well, respiratory disease can still rear its ugly head – often for no apparent reason. We know that the two main viruses that cause bovine respiratory disease (BRD) – RSV and PI3 – are commonly there circulating in the calf environment.

farms, so calves are likely to be exposed. “So there’s a subclinical issue too. The calves may not be showing significant outward signs of BRD, like coughing, but it will have an impact on intakes and growth rates. “Remember, any check in growth can result in the heifer missing her targeted calving age – typically 24 months old, or below. Even subclinical disease can reduce growth and infection can shave 200g off her daily liveweight gain. If the target is 1kg per day, that’s around 25%.” With this in mind, vaccination seems like the next logical step in protecting young calves from BRD – and keeping growth rates on track. “It does require a change in mindset, which we’ve seen among producers in terms of colostrum feeding and ensuring that calf housing, hygiene and feeding all meet the gold standard when it comes to protecting health and maximising growth.

“It’s relatively simple and cost effective to implement a vaccination programme to protect calves against BRD and the negative impact that it can have in terms of clinical disease and growth rates.”

A vaccination programme, used as part of an effective disease control plan, can be devised in conjunction with the herd’s vet, according to the needs of each individual farm. “Where protection is required early on, Bovalto Respi Intranasal can be used from 10 days of age,” says Dr Milnes. “This is an intranasal vaccine that protects against the two main respiratory viruses – RSV and PI3. Updated strains of the viruses were used in the vaccine’s development.”

She adds that it’s delivered as a single dose and provides protection for 12 weeks, from 10 days after vaccination. Where there is not such a need for early protection, or where cattle are older and ready for housing, then Bovalto Respi 3 or Bovalto Respi 4 can provide six months of protection from three weeks after the initial course of two injections.

In addition to providing protection against PI3 and RSV, both also protect against Mannheimia haemolytica, a common bacterial cause of pneumonia. Bovalto Respi 4 also protects against BVD, which can be very useful for farms buying in young stock of unknown BVD status. “When you consider the hidden costs and losses caused by BRD and the total cost of rearing heifers to calve at

24-months-old, the additional investment in a vaccination programme against BRD is incredibly small.

“Producers should view it as insurance – as a way to protect their investment. Young stock are the future milkers and potentially genetically superior to those already in the herd,” adds Dr Milnes. “It makes sense – economically and in terms of reducing antibiotic use –to protect them from disease, rear them efficiently, and give them every chance of realising their full potential.”

Back to Main Blog Page